On the afternoon of February 15, Steve McNeil touched down in Calgary for his epic 19 hour and 26-minute skate to raise awareness for dementia and Alzheimer’s. For seven years in a row, McNeil has paid tribute to his mother, who had Alzheimer’s, and caregivers by braving the cold temperatures as he skates for 19 hour and 26 minutes in Toronto. This year, he decided to raise the stakes and skate 19 hours and 26 minutes in all seven of the NHL cities in Canada – including Calgary.

Stepping on the ice at midnight at Thomson Family Park downtown, McNeil was greeted by snow and blistering cold temperatures that dipped below -30 degrees Celsius. Despite the cold weather and the less than ideal ice conditions, he was adamant that it was nothing compared to what the people battling Alzheimer’s and their caregivers face on a daily basis.

Donned in a bright yellow sweatshirt and flannel AC/DC pants to stay warm, McNeil had plenty of company during his skate. From people bringing him coffee in the early hours of the morning to people lacing up their skates to join him, his presence touched the lives of many in our city.

As McNeil was looking forward to the final few hours of his skate on Saturday afternoon, his impact in the community was solidified when he had a special visitor. Chris Slade, the drummer for McNeil’s favourite band, AC/DC, heard about his unique way of raising awareness from his son, who lives in Calgary. On top of visiting with Slade’s son, Slade himself was able to video call McNeil on his iPhone in order to offer inspiration and support for the remainder of his skate.

As a result of the conversation with Slade and from the fantastic media coverage in Calgary, it wasn’t long before his story was heard by another member of AC/DC. Angus Young, the guitarist for the band, made a whopping donation of $19,260 to McNeil’s cause and commended him on his effort to raise awareness for this cause. Young’s brother and bandmate, Malcolm Young, died from complications of dementia in 2017.

As an unforgettable trip to Calgary came to an end, McNeil looked ahead to the final cities on his journey feeling rejuvenated and with a renewed sense of purpose.

We are looking forward to seeing McNeil in Calgary again in 2020.

If you would like to learn more about Steve or how you can make a donation, visit his page here.

This donation page will be online until the final game of the Stanley Cup finals. That means there is still time to contribute. 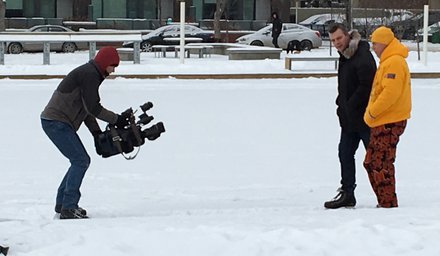 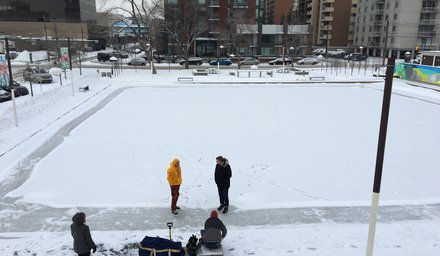