You are here: Learn / Cause And Cure

What causes Alzheimer’s disease and other types of dementia?

So far, scientists have not been able to determine exactly what causes most types of dementia, such as the plaques and tangles in the brain that cause Alzheimer’s disease, or the degeneration of the frontal and temporal lobes of the brain (with frontotemporal dementia).

It’s most likely that dementia is caused by a complex interplay of genetic, environmental and lifestyle factors. We are always seeking to learn more.

Contrary to popular myths, dementia is not often caused by genetics.

Despite common perception, heredity and family history are implicated in only a small percentage ( less than five per cent) of cases of Alzheimer’s disease and frontotemporal dementia (10 — 15 per cent).

Paul and Padmaja discuss genetics in the video below.

Can dementia symptoms be reversed?

Unfortunately, the majority of dementias are non-reversible and cannot be corrected. Only a few causes of dementia-like symptoms are reversible:

Is there a cure?

While there is currently no known cure for most types of dementia, there are medications available to manage some of the symptoms. These medications are most effective in the earlier stages of the disease, hence the importance of timely diagnosis.

There are a host of resources available in the community. Timely diagnosis will allow for the opportunity to explore these resources and continue to live the best possible life with the diagnosis. 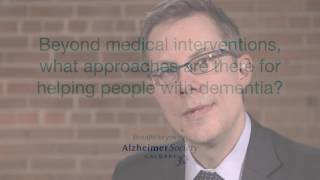