You are here: Learn / Types Of Dementia / Alzheimer's Disease

It’s the most common cause of dementia.

Many people believe that dementia and Alzheimer’s disease are one and the same and use the terms interchangeably, but this is simply not true. While the term “dementia” refers to a general decline in mental abilities, which could be associated with several disease conditions, Alzheimer ’s disease is the most common cause of dementia.

The incidence and prevalence of Alzheimer’s disease increase dramatically with age. Approximately 80 per cent of people with dementia are above the age of 75.

The overall lifetime risk of Alzheimer's disease at age 65 is about 21 per cent for women and close to 12 per cent for men.

What changes can I expect?

The symptoms and progression of the disease vary greatly from one person to the other. Symptoms of Alzheimer’s disease will become progressively worse over time. In the very early stages, the person may need assistance with activities such as preparing meals, banking, transportation, managing a home and finances.

The person can experience early and prominent deficits in memory, with varying degrees of language, reasoning and decision-making and visuospatial difficulties.

Other symptoms can include:

In the later stages of the disease, assistance will be needed for activities of daily living such as eating, personal hygiene, grooming, dressing and bathing.

Behaviour changes can also be apparent and can progress from anxiety, depression and frustration in the earlier stages to hallucinations, delusions, suspicions about family/professional caregivers, apathy and sometimes aggression. This can be challenging for caregivers.

Average life span following a diagnosis varies between 8-15 years and is impacted by multiple factors such as age at diagnosis, gender, presence of psychotic symptoms, presence of motor symptoms and coexisting medical conditions.

What changes happen in the brain with Alzheimer's disease?

The hallmark of Alzheimer’s disease is the appearance of plaques and tangles in the brain.

Plaques are an abnormal collection of Beta-amyloid protein in the spaces between the neurons (or nerve cells). Tangles are twisted strands of Tau protein that collect inside the nerve cells.
These plaques and tangles affect the ability of the nerve cells to communicate with each other and ultimately cause the nerve cells to die. This can result in shrinkage of the affected parts of the brain.

There is a loss of connections between nerve cells and a decrease in the level of neurotransmitters in the brain, such as Acetylcholine, that help in transmitting messages from one nerve cell to the other.

An area called the Hippocampus, located deep in the temporal lobe of the brain is the first to be affected in Alzheimer’s disease. 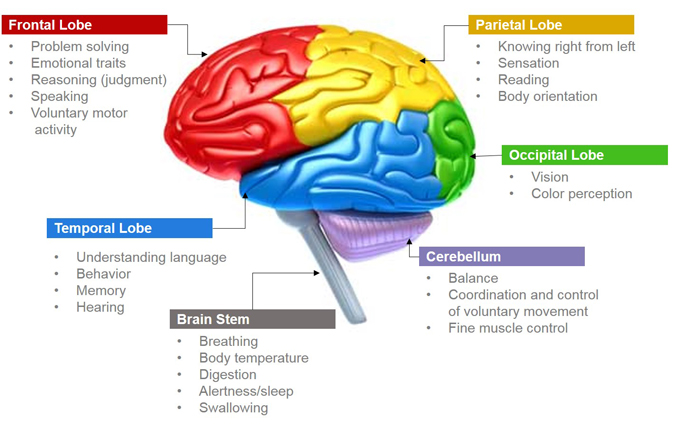 This part of the brain is involved in learning and memory, which accounts for why the loss of memory of recent events is often the first symptom of Alzheimer’s disease.

These changes are progressive and spread slowly to other parts of the brain.

The symptoms of Alzheimer’s disease and the course of symptoms that appear is different from one person to another. It depends on the parts of the brain affected and the rate of progression of the disease.

It’s believed that plaques and tangles start developing in the brain at least 15 years prior to the onset of symptoms.

What causes these plaques and tangles to form?

Researchers around the world are working hard to identify this. What triggers the formation of plaques and tangles in the brain is not very clear, though several theories have been proposed. An interplay of multiple factors including genetics, environmental factors, lifestyle, and overall health is suspected.

Recent research points to chronic inflammation as a major factor in the development of Alzheimer’s disease. Infection in the mouth and gut is also believed to play a role, indicating a potential gut-brain connection as well.

Research is ongoing in this field.

What are the risk factors for Alzheimer's disease?

How is Alzheimer's disease diagnosed?

There is no single, conclusive test for Alzheimer's disease or any other types of dementia. A diagnosis is usually made by excluding other causes that present with similar symptoms.

A diagnosis is made based on investigating a person's medical history, a physical assessment, blood tests, imaging and cognitive assessments.

A physician will first take a detailed history from the person with symptoms/concerns about dementia and from family members, if available. This will be followed by a thorough physical examination and blood tests to rule out conditions such as infections, vitamin deficiencies, thyroid problems and the side-effects of medication.

Following the initial blood tests, the physician may refer the person to a specialist. The specialist may be a neurologist, a physician in geriatric medicine or a general psychiatrist or a geriatric psychiatrist.

The person's memory will be assessed, initially with questions about recent events and past memories. Their memory and thinking skills may also be assessed in more detail by a psychologist. A brain scan may also be carried out to get some information to identify any changes taking place in the brain.

At the end of these investigations, the physician is able to make a diagnosis of dementia and narrow down the most probable type of dementia.

Is there a cure? What kind of treatment is available?

Unfortunately, at this time, there is no known cure for Alzheimer’s disease, but medications are available to help control the symptoms.

These medications include Cholinesterase inhibitors such as Aricept (Donepezil), Exelon (Rivastigmine), Reminyl (Gallantamine), and Ebixa (Memantine). However, these medications do not stop or slow the progression of the disease. They help to control symptoms for a variable period of time.

Side effects of Aricept, Exelon, and Reminyl are found to be mild and may include nausea, vomiting, diarrhoea, insomnia, fatigue, drowsiness, and loss of appetite. An Exelon patch is now available that helps reduce gastrointestinal symptoms.

Ebixa is an NMDA receptor agonist and works by decreasing the level of glutamate in the brain. Its side effects include dizziness, headaches, and tiredness, and rarely confusion, and hallucinations.

Research has shown that giving Aricept in combination with Ebixa leads to better control of symptoms and slows down the progression of symptoms.

*This content is provided for informational purposes only and is not to be used for diagnosis or treatment of any type of dementia or its symptoms. Any mention of pharmaceutical interventions or treatments is not an endorsement by the Alzheimer Society of Calgary. This information is apt to change at any time without notice. For medical advice, please contact your physician.