You are here: Learn / Common Questions

We've compiled a list of commonly asked questions to help learn about Alzheimer's disease and other types of dementia.

Back to Top
1. What is the difference between Alzheimer's disease and dementia?

Dementia is a general term that describes acquired challenges with memory, thinking, reasoning, judgment and behaviour that have a significant impact on a person’s daily life. Alzheimer’s disease is one particular cause of dementia - and the most common. Find more information about dementia and Alzheimer’s disease on our website.

Back to Top
2. What different types of dementia are there?

You can find more information inside the Types of Dementia section on our website.

Back to Top
3. Do I need a diagnosis or a physician's referral to get help or contact you? What if I just have questions or want information?

Not at all. Any person can contact the Alzheimer Society of Calgary – whether you’re concerned for yourself or someone you care about. You do not need a referral.

Back to Top
4. Can medication be used to treat dementia?

Occasionally, dementia symptoms can occur because of Vitamin B 12 deficiencies, nutritional deficiencies, thyroid disease, depression or delirium. If these types of dementia are diagnosed promptly and corrected, a person may be able to recover almost completely. Some cases of normal pressure hydrocephalus are also responsive to treatment.

Back to Top
5. Is Alzheimer's disease hereditary? Is there a genetic component?

Only a small portion of Alzheimer's disease cases (five to seven per cent) are hereditary; the majority of cases are not. If a person has a genetic predisposition to developing dementia, it is more often the young (or early) onset type (which will appear before reaching age 65).

Back to Top
6. Can genetic testing be done to assess a person’s risk of getting Alzheimer’s disease?

Genetic testing can be done but it is generally not recommended except in more rare cases where there‘s a family history of diseases contributing to dementia.

Back to Top
7. How is Alzheimer's disease diagnosed?

There is no single test available to diagnose Alzheimer’s disease. Diagnosis usually happens as a result of a combination of things, such as reviewing a person’s medical history, physical exams, lab tests, imaging procedures and cognitive assessments.

At least two of the following core mental functions – memory; communication and language; ability to focus and pay attention; reasoning and judgment; and visual perception – must be significantly impaired to be considered for a potential dementia diagnosis.

Following a thorough physical exam, the person is sent for blood tests, CT and MRI scans to rule out other conditions.

The family physician may refer the person to a specialist such as a neurologist, geriatrician, psychiatrist or geriatric psychiatrist. The person will often undergo cognitive assessments including tests to assess memory, recall, orientation and thinking. A diagnosis of probable Alzheimer’s disease is made after excluding all other potential causes.

When a diagnosis of probable Alzheimer’s disease is given, the physician is typically 85 – 90 per cent certain of the diagnosis.

As Alzheimer’s disease progresses, the cognitive challenges (issues with memory, reasoning and judgment) will grow and the person’s abilities to communicate and care for themselves will progressively decline. Behaviour changes may become more challenging but will vary from person to person. The average life span is eight to 12 years from the time of diagnosis but varies for every individual.

The duration of the disease depends on the age and overall health of the person.

The majority of people with dementia die from complications and causes that are directly related to dementia - such as pneumonia or infection.

Back to Top
9. Can Alzheimer's disease be treated and cured?

Unfortunately, there is no known cure for Alzheimer’s disease. Medications are available that can control symptoms for variable lengths of time. These medications cannot stop or slow the progression of the disease. They alter the level of neurotransmitters – chemicals in the brain – that help the nerve cells communicate with one another. These medications will be prescribed if the physician believes it’s appropriate.

Back to Top
10. Are there any alternative medications/supplements to treat or prevent Alzheimer's disease?

At this time, no alternative medications or supplements have been shown to be extremely effective in treating, slowing the progress of, or preventing Alzheimer’s disease. There are some concerns regarding the use of alternate medications, such as unknown ingredients, unknown effectiveness, safety and side effects due to interaction with prescribed medications.

Back to Top
11. Is coconut oil an effective alternative to medication in Alzheimer's disease?

Back to Top
12. Does coffee help to reverse the symptoms of dementia?

To date, no conclusive study has proven this claim. Cocoa has been shown to have some beneficial effect on cognitive health in some trials. More research is needed to confirm this.

Back to Top
13. Is there a link between alcohol, smoking or drug use and dementia?

Alcohol: Heavy and long-term alcohol consumption can cause alcohol-related dementia. Mild to moderate intake of alcohol is not associated with an increased risk of dementia.

Smoking: Associated with an increased risk of dementia.

Drug use: Long-term use of a group of medications called benzodiazepines have been associated with a higher risk of cognitive decline. The impact of other drugs on dementia is not very clear. Excess drug use is believed to adversely impact cognitive functioning.

Back to Top
14. Does alcohol influence behaviour changes in dementia?

It is not advisable for a person with dementia to consume alcohol since alcohol is neurotoxic (toxic for the brain). It can aggravate the symptoms of dementia and aggravate behaviour changes.

Back to Top
15. How do you manage aggression, delusions and other behaviours?

Behaviour changes are common in people living with dementia and can be distressing for caregivers.

All behaviour has meaning and should be interpreted as a form of communication.

Back to Top
16. How can I prevent or delay the onset of dementia?

We recommend risk reduction strategies to help maintain the health of your brain.

Read more on our page about risk reduction

Back to Top
17. Is it important to disclose the diagnosis to the person who has dementia?

We advocate for person-centred care and the Best Friends Approach™, which outlines that every person has a right to be informed of their diagnosis.

How this information is delivered will depend on the individual needs of the person and their situation. If the person is anxious for an explanation of their symptoms, they may find some relief in diagnosis and it may be fine to inform them.  If the person is likely to be very upset, you could suggest that the physician conveys the news to them gradually. Contact us or your physician to discuss in further detail.

Back to Top
18. I'm worried about telling family members about the diagnosis. What should I do?

Sometimes family members are somewhat relieved to have a diagnosis because it helps them understand why a loved one has changed. At the same time, it can be overwhelming for the family when they understand the implications of the diagnosis.

Speak to our support team or try counselling to help the family deal with their emotions and cope with the diagnosis. Contact us for information, guidance and support

Back to Top
19. How should I respond to repetitive questions?

A person living with dementia is experiencing changes within their brain that create difficulties with short-term (and sometimes long-term) memory. They simply can’t recall the answer you just provided. Try to understand the reason behind their questions. Could they have any unmet needs, fear, loneliness or frustration? Acknowledge and validate the emotion and then respond to the emotion. You can also try gentle distraction or redirection to a favourite activity or object. We have a workshop to help with this.

Back to Top
20. The person is asking for someone who has passed away. Should I tell them the news again?

Try to understand the reason behind their behaviour. For instance, if they are asking to see a parent who died long ago, they may be feeling afraid, lonely, or sad. Validate the emotion that is expressed. Instead of reminding them that their parent has passed on, you could respond with something like, “It seems like you are missing him/her. I am sure he/she is a wonderful person. Tell me more about him/her.” Try to redirect the conversation or distract the person to focus on something else.

Back to Top
21. When is it time for a care facility?

As dementia progresses, the need for care increases and the person with dementia will need supervision and care both day and night. It can be difficult for a caregiver to meet the increasing needs in advanced stages of dementia. Other factors to consider are the caregiver’s physical and mental health, stress levels and sleep disturbances.

A care facility is not a solution for everyone. But for those who may benefit from higher levels of care, the time to move the person varies based on the people involved and the unique situation. The decision is best made by the family

Back to Top
22. The person doesn’t remember our last visit, but I see them regularly. Should I remind them that I visit often?

The person is missing you. Validate that feeling. Respond to the emotion and spend time with them, perhaps doing a favourite activity. Do not try to correct the person or argue.

The person may not recall your last visit because of the impact of dementia on their short-term memory. Try not to take it personally because it is simply the nature of the disease that’s affecting their brain

Back to Top
23. My family member repeatedly asks to go home from their care facility. What should I do?

This is one of the most common reactions for a person with dementia living in a care facility. Provide simple explanations to why they are there and try to redirect them by finding another meaningful activity.

Back to Top
24. Are routines helpful for people with dementia?

The world is constantly changing for us and we can only imagine how this must feel for a person with dementia. This is complicated by the losses and the new challenges they experience as the disease progresses. Having routines and a structured schedule will help establish a sense of normalcy for the person. Many people find it helpful to have a routine that they stick to as closely as possible.

Back to Top
25. Do all people with dementia become aggressive?

No. Noticeable changes in behaviour and personality are common in dementia because of the changes happening in the brain. Some people with dementia can become aggressive, whereas others may become more laid back. Dementia affects each person differently. There are strategies that can help manage these changes in behaviour. Contact us today.

Back to Top
26. Can cannabis be used an effective treatment?

A few small clinical trials have assessed the effects of cannabinoids, including THC and synthetic cannabinoids like nabilone, on behavioural symptoms of dementia. However, scientific reviews have found that the trials and studies so far have generally been small or of low quality, making it difficult to come to an informed conclusion.

Ultimately, research in this area is still in its infancy.  Therefore, further research, large-scale clinical trials and time to create a body of evidence for the use of these substances are all needed before cannabis-derived products could be recommended for the treatment of Alzheimer’s disease and other dementias.

In the video below, Learning Specialist Padmaja Genesh discusses cannabis and its relation to dementia. 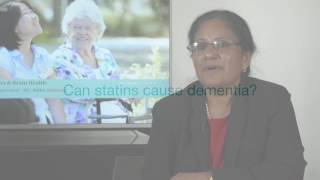